Skype recently start the idiotic process of requiring users to sign-in to their Skype accounts before giving them a download link. To get around that, use the links on this page:

http://ptspts.blogspot.com/2010/11/how-to-download-skype-without-having-to.html
Posted by Alo at 2:00 PM

Here are some useful registry keys for Windows 7 Aero Peek. If you don't know how to edit the registry, you probably shouldn't be messing with it.

These are all 32-bit DWORDs.

A Comprehensive Look at Dig

The ones I use most:

Wellington's got their shit together:
http://www.stuff.co.nz/oddstuff/5180946/Wellingtons-zombie-apocalypse-plan

Is your town prepared?
Posted by Alo at 9:56 AM

John Stewart is awesome. John Stewart on Fox News, is priceless. I'm pretty sure Chris Wallace knew what he was in for, but it's still great to watch.

via Daring Fireball
Posted by Alo at 9:04 AM

Being a dad is rewarding and joyful and amazing. It's also one of the toughest things I've ever had to do.

Being a dad is being the authoritarian. The disciplinarian. It's laying down the law-and enforcing that law-and all the while praying that your kid doesn't hate you. It's listening to him cry and being firm. And hurting when they do. It's watching them run to their mom, who represents comfort, and doubting that you did the right thing. It's hoping that one day they'll understand.

They probably won't. Not for a long time.

It's wanting to spend time with your kids, and always getting caught up in work or reading the paper your RSS feeds. It's spending the whole day with them, trying to spend some time with your wife in the evenings, and then hearing them say that you never spend any time with them.

It's tough. It sucks sometimes. And half the time you wonder if you're going insane.

But it's also watching them graduate from Kindergarten and trying not to cry. It's watching them learn how to walk and realizing that the whatever shit task you had at work is nowhere near as hard as that.

It's being the hero in their story and conquering the monster-under-the-bed. It's working a 17-hour shift and knowing that your wife had a harder day than you did.

It's hoping your children will do better in life than you did and at the same time secretly hoping you'll be as great as your dad was.

It's laughter and tears. It's happy and sad. It's hugs and kisses. It's a damn country song on repeat. And I wouldn't trade it for the world.

So this is for all the father's out there. If you've ever wondered whether you're doing a good job or not, you are. You just won't find out for a long time. But the journey is going to be one of the best things you'll ever do with your life.

And this is for my sons, who I hope will one day understand as I did. And who I hope won't hate me when I have to be the bad guy. And who will always want 200% of my time. I love you guys.

This is for my grandfathers, who I miss more than words could say.

Being a grandfather is the reward you get for being a dad. It's spoiling your grandkids, and always being the good guy.

This is also for my Dad.

I didn't really understand my Dad until I had kids of my own. Even now, when I talk about my Dad, it's always a capital 'D'. And while I still think I know everything about life, when he talks, there's always a part of my that immediately says, "Yes, Dad".

And this is for all the times when you said someday I'd understand. Because I do. I've understood ever since I had my first son. And I love you for raising me the way you did. And I'm sorry for the times I have be tough on the kids. It's easier being a grandparent, and I hope I make it that far. I'll probably give my son the same stern look you're giving me when he has to be tough on his kids. You probably learned that look from your father.

What I'm saying is, I'm sorry for being such a little shit sometimes when I was a kid. Although, I think we can agree that this is a case where the punishment fits the crime.

A great idea for a Photo tumble blog.
Posted by Alo at 2:00 PM


“Apple cannot continue to lock down its iOS platform and restrict the types of software developed for it, says security firm Kaspersky’s CTO Nikolay Grebennikov,” Stuart Sumner reports for Computing.

MacDailyNews Take: Kaspersky’s CTO Nikolay Grebennikov. Taking disingenuousness to the next level. Why didn’t he just come right out and say, “We wish Apple would make its platform insecure like Google, so that we can sell ‘security’ to hundreds of millions of iOS users?”

The State of the Tablet Market

Marco Arment does a nice deconstruction of the Ars Technica review:


"Android tablets have managed to copy the iPad’s hardware well enough — the easy part — but have failed to provide good software and significant third-party app choice — the hard part."

And in other news, Acer cuts its table forecast in half.

The most apt description of it all is summed up by Dare Obasanjo on Twitter:


"Acer finds out what I've always said, there isn't a tablet market, there's an iPad market..."


"Based on the encouraging results, we’ve decided to leave our Developer site dual-stacked, supporting both IPv4 and IPv6. And we will continue to adapt our entire code base and tools to support IPv6."
Donn Lee, Facebook Engineering

Wikipedia link earlier today when clicking on the Google headline for the lunar eclipse:


"A lunar eclipse is when the moon turns black and explodes, releasing a poisonous gas, killing all of humanity..."

It takes you to the real Wikipedia page, but I'm not sure if this bit of humour is from Google or Wikipedia.

Sadly, the link no longer shows up like this if you check now.
Posted by Alo at 12:07 PM

This is huge. Especially if you travel between Samoa and the mainland a lot.

HD Trailer on YouTube
Posted by Alo at 2:00 PM

This article pretty much sums up my thoughts about Lebron James.

Micheal's getting a little old now, but the 1998 Jordan would have wiped the floor with this guy.

WTF?! moment of the day:

Maybe this is why people like her. Of course, going from what she is now to Wonder Woman is a pretty tall order.
Posted by Alo at 1:33 PM

That's actually a pretty good idea. Considering the aim of the The Voice is to get a recording contract, counting how many songs an artist actually sells would be a good indicator of how they sell if signed.

Plus, adding money to the mix means your votes really will count. You wouldn't download a garbage song just because the singer looked hot. Or would you?

Here's a Dell Latitude e6400 with SpeedStep turned on running with the charger plugged in. 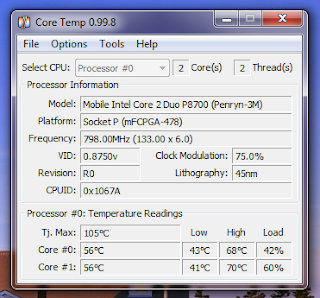 A Core 2 Duo running at 800Mhz?! Yup, the multiplier has been set to 6 and the frequency is halved at 133.
Ok, let's unplug the power and run off battery. 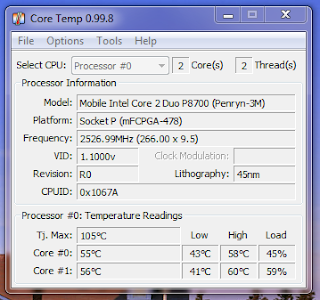 Oh, hey, 2.5GHz. That's more like it.
Unfortunately, this means I get full speed for about two hours then have to put up with 800MHz on battery.
But what happens if we disable SpeedStep? Well, then it sets it to the lowest clock multiplier of 6, but the regular frequency of 266, and I get about 1.6GHz all the time, on charger and battery. 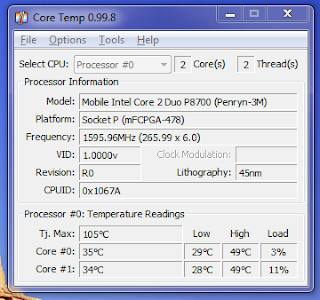 What I'm guessing is that the 65W charger that the laptop came with doesn't provide enough power to run the laptop at full speed. A 90W charger may solve the issue, but I don't have one to test with.
For now, I'll probably just compromise, turn off SpeedStep and run at 1.6GHz.
p.s. Turning off SpeedStep has to be done in the BIOS and requires a reboot. Ugh.
Posted by Alo at 8:00 AM

According to the press release, ChAIR Entertainment has made over $10 Million dollars on Infinity Blade in the first 6 months of release.

That means they would have had to make over $16.6 Million total considering Apple's 30% cut. That's over 2.7M units sold.

Now, 2.7M units over 6 months isn't much compared to that, but I'm willing to bet that ChAIR is keeping a far larger share of the retail price than it would have with a game using the regular publishing methods on any of the main platforms.
Posted by Alo at 12:56 PM

Reminders are pretty cool, but not really noteworthy except for one simple feature: Location Reminders.
Getting reminded to buy milk when I walk into the store? Yeah, that's some I'm-living-in-the-future type shit right there.
Posted by Alo at 11:56 AM

Best of Behind the Scenes

Great behind the scenes shots on Angus Shamal's blog.

via Daring Fireball
Posted by Alo at 11:42 AM

Graphing Bandwidth Over Time In Excel

You would think that something as simple as graphing a rate over time would be easy in Excel—and it is—but you it's not really intuitive, at least to me.

If you try to select these two columns and then click on Line Graph, here's what you get.

That's obviously not what we want. The trick is to use a Scatter Plot. I prefer Straight Marked Scatter.

And here's the final result.

Run this command on the folder or drive that has the hidden folders:

by T-Pain feat Chris Brown. It's catchy and upbeat. And I've had it on blast all morning.

I followed the instructions here: http://www.allblogtools.com/tricks-and-hacks/exclusive-integrate-facebook-comments-box-for-blogger-in-very-easy-and-simple-steps-full-guide/

Note the following:
- you need a verified Facebook account (add either your mobile or a credit card to your profile)
- if you just copy/paste everything, you'll end up with a big, ugly image promoting that site

For just the comments without the image, paste this instead for the last part:


Now, I applaud the guy for putting up an easy guide to implementing this, and I'm gladly providing a link back to him at the top of this post.

Updated: If you change your template, you have to repeat the process again as I just found out.
Posted by Alo at 8:12 AM

"You may also wish to note what other things are categorized as Group 2B possible carcinogens, including gasoline, pickled vegetables, and (GASP!) coffee." - Why I’m (still) not worried about my cell phone hurting my brain, Phil Plait


via Daring Fireball
Posted by Alo at 7:21 AM