Since I've been using Win7 on my desktop, I've been finding some nice ways to integrate it into my daily workflow. My primary machine is a 2006 Macbook Pro 15", and so far the two have been playing well together.

Here are the main programs/utilities that I'm using and some commentary on each.

Dropbox (both)
This is such an integral component that it's listed first. All the files that I'm working on or have ever worked on are in here, and they're available on both machines and through the internet with almost no overhead.

Microsoft Office (both)
This is a requirement for work, and I've got it installed on both machines. The beauty of it is, with Dropbox, I can work on the same file from both machines.

Notational Velocity (Mac) / Resoph Notes (Win) / Simplenote (iPhone/iPad)
Synchronized notes available anywhere? Very yes. Simplenote is the glue that holds it all together, and I can access all my notes from my computers, my iPhone or my iPad. I could sync them all in Dropbox, but I love the Simplenote App (iTunes Link) on the iPhone/iPad and the interface is amazing. I was especially impressed with Resoph Notes on Windows. The interface is simple and it syncs perfectly.

Terminal & X11 (Mac) / SecureCRT (Win) / XManager 3 (Win)
My Mac has an advantage here because Terminal is included and X11 comes with the developer tools (free to sign up and download). On Windows, SecureCRT and XManager are great 3rd party tools, but they run about a few hundred dollars each. In either case, these are my bread-and-butter tools for SSH, Telnet, and xwindows exporting.

Cord (Mac) / Windows Remote Desktop (Win)
Windows would have a slight advantage since Remote Desktop is built in, but Cord is the best RDP client that I've ever come across. And it's free. In fact, I wish there was a Windows version of it.

Google Chrome (Win) / Safari (Mac)
Mac OS X comes with a pretty good browser, but Windows, on the other hand, doesn't. Internet Explorer is getting better, and I'm hoping IE 9 is decent, but out-of-the-box, it's crap. I used to go with Firefox, but Chrome is much faster and I can do without the plugins.
Posted by Alo at 1:33 PM

Windows 7 is kind of nice

I managed to scrounge up an old Dell Optiplex SX270

at work and decided to mess around with it. I installed Windows XP SP3 originally, but that was boring, so I grabbed a copy of Windows 7 Ultimate to try it out.

Frankly, I was shocked with the results. Overall, it ran much better on the old hardware than Windows XP ever did, and I really liked the interface overall. The only trouble I had on the install was the video driver. Luckily, techbirdy.com had the video driver I needed. I do get some strange artifacts on some of my video files, but everything else worked flawlessly.

Since it is an older box, none of the Windows 7 flashy UI stuff is turned on, but as a day-to-day workhorse it's turned out really well.

I'm going to try something new and do one post a day for this week (except for weekends; I have a life). The plan is to go with very little editing and see how much content I can put out there. I've got a ton of items in my "Blog Ideas" file, so it should go pretty well. We'll see...
Posted by Alo at 12:58 PM 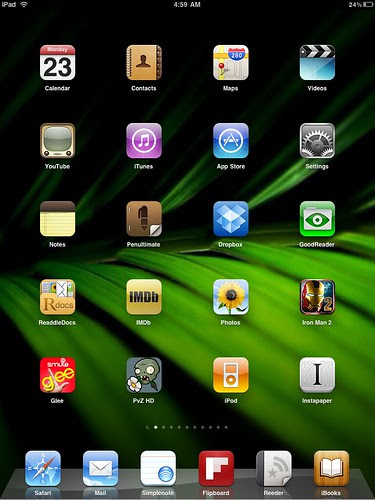 Here's my Home Screen 3 months after getting my iPad. I'll probably get rid of GoodReader since ReaddleDocs has been doing a better job of getting to my documents on-the-go. Ditto with the Notes App. Simplenote is an order of magnitude better.

Wallpaper by mandolux. I got it a while ago, so you'll have to go through the archives yourself to find it.
Posted by Alo at 5:02 AM

Amazing book. I've been reading Rands in Repose for a long time, and while a lot of content is taken from the blog, there is a lot more that's exclusive to the book.

You can get the dead tree version from Amazon on the right at a pretty good price (and I get a nice kickback), but unfortunately, the e-book isn't available on any of the online stores for the apps that I use (Amazon Kindle, B&N Nook, Apple iBooks).

So I've had the case for a couple of months now, and it's taken a beating. But it's still doing well in it primary function: keeping my iPad safe from minor dings and scratches. The only two major items are the leather tab and the inside of the cover. 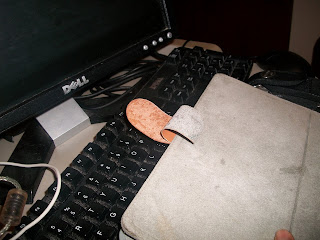 The leather tab started to fray after a few weeks of use. Now, the underside has completely peeled off and it's flapping free. After taking the picture, I cut off the loose end and its much easier to slide into the slot in the closed position. The stand position still takes some tugging to get it through, but it's a minor issue in that case. The major issue is that the cardboard is really wobbly now when standing it up. 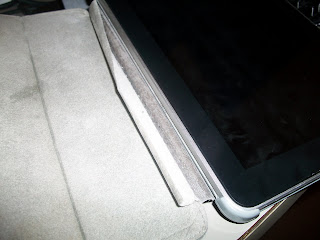 The other problem is that the inside of the front cover came off. It looks like it attached to the plastic piece with some glue and just pulled off after frequent use. It's not a big deal, but I do wish it was attached a bit more securely. Ultimately, though, it doesn't detract from the functionality at all.
All in all, I'm still a bit ambivalent about the case overall. It's still protecting my iPad, and I do put it through a lot of daily use. But at around $35, I would have expected it to last longer. I probably won't replace it until it wears out completely, so in that regard, I'll consider it a good purchase if it lasts six months to a year.